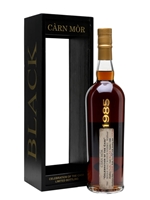 A 1985 vintage Macallan from independent bottler Carn Mor as part of the Celebration of the Cask series. Distilled on 7 March, it was aged in sherry butt 1388 for 31 years before 440 bottles were yielded on 19 September 2016.