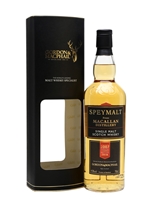 A 2007 vintage Macallan released by independent bottler Gordon & MacPhail as part of the Speymalt series. This was bottled in 2016, making it approximately nine years old.