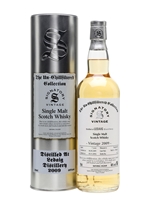 A 2009 vintage Ledaig from indie bottler Signatory as part of The Un-Chillfiltered Collection. Distilled on 6 April, it was aged in a pair of hogsheads for seven years, before being bottled on 3 November 2016. Ledaig is the name for the smoky, peaty whisky from Tobermory distillery on the Isle of Mull.