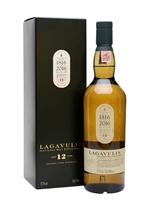 The 2016 Special Releases bottling of Lagavulin 12 Year Old, celebrating the distillery's 200th anniversary. It's a punchy and coastal-tinged whisky, showing another side to the distillery's character from the 16-year-old.