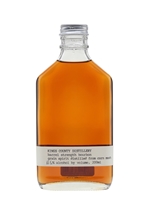 This release from New York's Kings County is made from some of the oldest spirit at the distillery and has been bottled at 63%. This is rich and sweet with notes of vanilla, caramel, cinnamon and autumn spices.