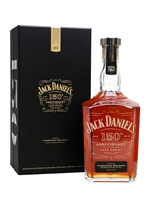 This special-edition Jack Daniel's commemorates the 150th anniversary of the distillery in Lynchburg. Made to the same mashbill as the famous No.7, this has been released at a higher strength of 50%, adding extra complexity and intensity to the butterscotch and toffee notes.