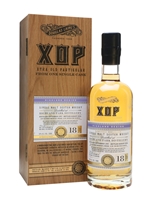 A single refill hogshead of 1997 Highland Park, bottled by Douglas Laing for the Xtra Old Particular series. Distilled in September an bottled in August 23016 at 18 years of age, this is sweet and smoky with notes of honey, toast and sweet peat.