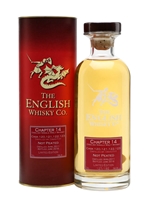 The cask-strength release of English Whisky Co's Chapter 14 - the unpeated release. Aged in four bourbon casks distilled in April 2011, this is fruity with notes of Fruit Salad sweets, brandy snaps and barley sugar,