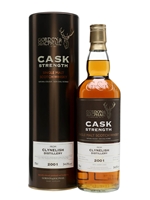 A 2001 vintage Clynelish from independent bottlers Gordon & Macphail as part of their Cask Strength series. The whiskies produced at this distillery are matured mainly in either the on site warehouses, or the ones over the road which used to belong to Brora distillery.