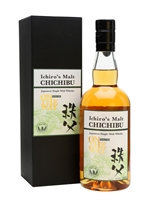 The 2015 release of Chichibu On The Way, a series charting the fledgling distillery's progress. This is a multi-vintage vatting of whisky distilled at various times since they opened in 2008, including some of their oldest. Surprisingly complex for a young whisky, it shows the skill of distiller Ichiro Akuto and his team.