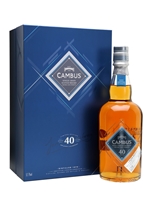 The first official bottling of Cambus since at least the turn of the 20th century, this 40 year old was released as one of the headline bottles of the Diageo Special Releases 2016. Classic grain whisky notes are balanced by huge fruity character, giving one of the best grains we've tried in years.