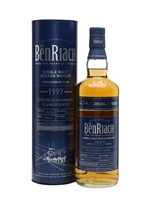 This 19-year-old Benriach was aged in a bourbon barrel and released for the 60th anniversary of French retailer La Maison du Whisky. Distilled on 14 July 1997 and bottled in September 2016.