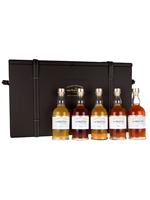 The second in annual release of five-bottle sets to commemorate the work of Balvenie malt master, David Stewart. Chapter One is named The Influence of Oak and contains whiskies that show off the effect of different cask types on distillery's character – one each from 1972, 1997 and 2001, along with a pair from 1990. The set is presented in a walnut and brass frame, with a signed copy of the book explaining each bottling and the releases.