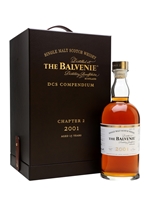 The youngest release in the second chapter of Balvenie's DCS Compendium, this 15-year-old whisky was aged in a Pedro-Ximenez-sherry butt. Syrupy with a toffee sweetness and notes of ginger and wood spice.