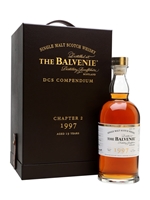 The cask used for this 19-year-old release as part of the second chapter of Balvenie's DCS Compendium was previously used to finish the 21 Year Old PortWood expression. Filled on 6 August 1997, this is warm and inviting with notes of prunes, plums and figs.