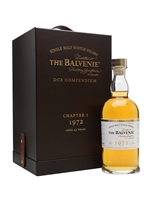 The oldest release in the second chapter of Balvenie's DCS Compendium, this was distilled on 31 October 1972 and aged for 43 years in a single oloroso-sherry butt. Spicy with a hint of honeyed sweetness and notes of butterscotch, vanilla, toffee and cinnamon.