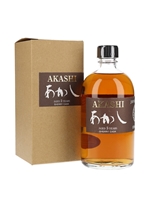 Akashi Single Malt Whisky is made at the White Oak distillery in the Hyogo prefecture. Matured for two years in sherry butts and three years in hogsheads, this is a lightly peated Japanese whisky.